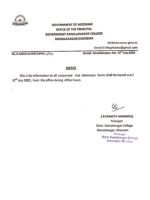 INTRODUCTION
Government Kamalanagar College is co-educational Under Graduate (UG) Degree College, and abbreviated as GKNC. It is located in Kamalanagar, Chawngte, the Headquarters of Chakma Autonomous District Council (CADC) in Mizoram. The area was purely Tribal belt, as enshrined by the Sixth Schedule of the Constitution of India. It was bounded by 318 km of Indo-Bangladesh border in the West, and 404 km of Indo-Myanmar border at the south, and the CADC was at the tip of India international border in Mizoram state. Absolutely, it is Tribal inhabited area, where majority of the population is Chakma (Tribal), but different other tribal communities, like Bawm (Mizo), Tlanglau (Mizo), Reang / Bru, and few businessmen of non-tribal communities, subsistent their live in the headquarters and nearby villages.
GKNC is mono-Institute, and offer ‘Arts’ stream only. The College was started by some aspire educationists on 4th April, 1992, and give student admission for Higher Secondary or 10+2, and teachers recruitments were done through advertisement and inviting qualified persons from all over the country. Initially, the institute was purely ‘Private College’, but sooner or later, the Government of Mizoram has given the status of ‘Deficit College’ on 1st January 2007. With this new status, the State Government provide annual financial ‘Lump-Sum Grant’ to the institute, and many of the financial gaps were enlightened.

PERMANENT AFFILIATION & UGC RECOGNITION
On 30th July 2009, Mizoram University (MZU) has granted ‘Permanent Affiliation’ (Vide No. MZU//CDC/1/19/09/380, dated 30th July 2009). The College was ‘Provincialised’ to purely Government College on 19th September, 2013 (No.B.16013/1/2007 THE dated 19th Sept.2013). With this Provincialisation Order, the Government of Mizoram absorbed all the Staffs (Teaching and Non teaching) of the College to Government Servant, and the properties of the institute go to the state authority.
The Apex authority of Higher Education in India, i.e., the UGC (University Grants Commission), has given recognition under 2 (f) and 12 B of the UGC Act, 1956 on 30th July 2010 (Vide F.No.8-271/2009(CPP-I/C) Dt.30.07.2010). Unfortunately, the whole campus caught fire on the midnight of 29th August 2012, and there was nothing left, rather, the whole buildings, library books, office records and furniture turned into ashes within a night. There was no life lost, but the students have no class room, and teachers has to continue teaching under the tree and wherever possible, for almost half year. The total lost was calculated to the tune of 3.5 crore (approx), and the incident or lost was reported to the Governor of Mizoram, Minister i/c Higher & Technical, Vice Chancellor (MZU), Deputy Commissioner of Lawngtlai District, Office of UGC-NERO, Regional Centre of IGNOU, and other officials. In fact, the College begins with its presence status since the academic session of 2013-2014 only.

MANAGEMENT
Kamalanagar College is the culmination of the efforts of the Governing Board and local Chakma inhabitant’s, who made contribution from different sources to meet the salary of the staff and other expenses, which include contributions from the monthly salary of the District Council’s employees. It is a lone Under Graduate degree college established in the entire area of CADC Tribal Belt. As in 2018, the College has 33 teaching faculties (18 male & 15 female) and 13 non-teaching staff’s (9 male & 4 female) with sophisticated 8 (eight) Departments viz, Mizo, Hindi, English, Economics, Education, History, Political Science, and Public Administration. According to December 2017 records there are 369 students (283 boys & 86 girls), while Student – teacher ratio is 1:13.

COLLEGE MOTTO & EMBLEM
The motto as decided by the founders of the College is moving “TOWARDS EXCELENCE” with an open Book illuminated by a burning lamp as its emblem.

PRESENT LOCATION
Untill December 2017, Government Kamalanagar College was houses in a Katcha building temporary site of the District Council (CADC) land pass. Since January 2018, the College was shifted to its Permanent Campus, which is 18,971 sq.km at the western side of Kamalanagar, Chawngte. This permanent campus was allocated by the CADC (Lease No.01 of 2017), as for genius higher educational hub of the tribal communities of the inhabitants.

HOW TO REACH
Government Kamalanagar College can be reached from Aizawl, the State Capital of Mizoram through Road, and Routine Helicopter Flight. By Road, it is 287 Kms from Aizawl via Thenzawl World Bank Road, or 335 Kms via National Highway 54 (54NH). There is daily Maxi Cab Service (direct) from Aizawl, and the fare is Rs 1000 per head, unfortunately none other Road transport services are available. Moreover, there is direct Helicopter Service (Pawanhan) from Aizawl, and the fare is Rs. 3800 per head, and this chopper service is available twice a week (Tuesday & Friday) only. There is State Bank of India-SBI (ATM attached), Mizoram Rural Bank, Airtel communication Tower and BSNL-thus one’s can access 2G or 3G(sometime). There is humid climate, very hot in summer, and cold in winter, but the climate is cool between November to February. Tourist Lodge, Circuit House, and PWD IB’s were 24 hours available for tourist and other visitors.